Few people, nowadays, have a bad word to say about Bristol. Over the past decade or so, the southwest’s largest city has emerged as a cosmopolitan centre that somehow manages to please most people, most of the time. 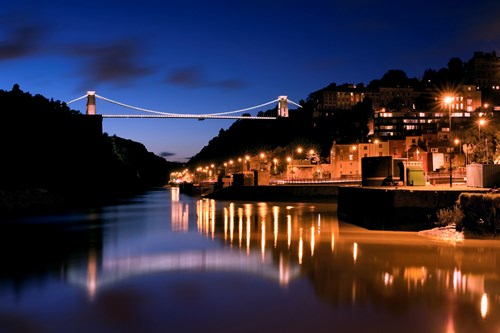 Bristol’s renewed popularity has been boosted in part by the huge millennium rejuvenation programme that has breathed new life, both cultural and commercial, into the city and surrounding areas. Today, Bristol is buzzing with countless trendy restaurants, bars, clubs and cafés (especially in the reclaimed old dockland area), superb shopping, not to mention a list as long as your arm of innovative tourist attractions to suit all tastes. The energy and ambience are tangible, and the variety and quality of Bristol bed and breakfasts, and that's B&Bs and Hotels, is second to none.

But Bristol also has a colourful past and a maritime history as a leading port and commercial centre dating back to the twelfth century. By the end of the fifteenth century, the city's prime location near the mouth of the River Avon meant that Bristol had become the main port for transatlantic trade. Over the centuries, Bristol flourished as a world trading centre dealing mainly in tobacco and wine. Then, in the seventeenth century, Bristol played a prominent role in the slave trade.

Bristol, however, is not one of those large cities that merely pay lip service to its fascinating history and rich heritage. This is a city that is proud of its past. The carefully restored architecture, the museums, art galleries and redeveloped old city centre together with the many other modern day attractions all hark back to the city's glorious past, while encompassing its exciting evolution into a modern city with a booming economy.

Things to See & Do In & Around Bristol

Bristol Zoo Gardens, Clifton, Bristol, BS8 3HA: Covering 12 acres, the zoo opened in 1836 and is the fifth oldest in the world. Bristol Zoo is committed to conservation and the development of international breeding programmes for endangered species. Favourite attractions include the award winning Seal and Penguin section, Zona Brazil, the Reptile House, Bug World and Twilight World.

SS Great Britain, Great Western Dock, Gas Ferry Road, Bristol, BS1 6TY: When launched in 1843, the SS Great Britain was the world's first iron hulled, screw propeller driven, steam powered passenger liner. Designed by Isambard Kingdom Brunel (1806 - 1859), the ship had twice the tonnage of any other contemporary ship. The Great Britain was ahead of its time and a big influence on ship building for the remainder of the nineteenth century. Abandoned in the Falkland Islands in 1886, the SS Great Britain was towed back to Bristol in 1970, to the place where it was originally built, and then painstakingly restored.

Clifton Observatory and Caves:  Fine views can be enjoyed from a camera obscura tower, located next to the Clifton Suspension Bridge. The nearby Clifton Caves are accessible through a small passage that leads to the Giants Cave from where you can marvel at panoramic views across the Avon Gorge.

Clifton Village: This suburb of Bristol is noted for its elegant Georgian terraces and huge range of specialist shops, as well as many up-market cafés and restaurants.

Finally, Bristol, the gateway to the south west of England, is easily accessible by road, rail and air. In addition, the nearby Severn Bridges offer a direct route to Cardiff and South Wales. There is also an abundance of first rate B&B accommodation in and around the city of Bristol, making it a perfect base for an action-packed UK long weekend break.

Always high up the list of top UK city breaks - Bristol has never been more coveted.