Relax and unwind in Devon

Relax and De-stress in Devon

Looking to de-stress at a stunning bed and breakfast in Devon? Devon is always the perfect destination in Britain to take a break – to slow down the pace, relax and de-stress. 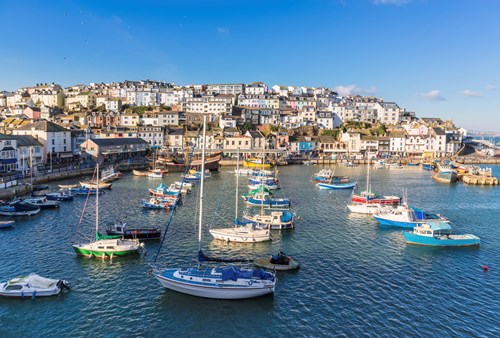 One of Britain's most popular holiday destinations. Open roads, open countryside, relaxing, picturesque towns and villages, friendly ambience in tearooms, pubs and restaurants and a huge selection of excellent B&Bs and Hotels to cater for all your needs. You simply can't go wrong.

There are regional variations within England as to how a cream tea should preferably be eaten. The Devonshire (or Devon) method is to split the scone in two, cover each half with clotted cream, and then add strawberry jam on top. Traditionally it is important that the scones be warm (ideally, freshly baked), clotted cream (not whipped), and that the jam be strawberry (although raspberry jam is sometimes used as an alternative[citation needed]). Butter should never be included, and the tea should be served with milk.

In Cornwall the cream tea was traditionally served with a "Cornish split", a type of slightly sweet white bread roll, rather than a scone. It is now rare to find this available commercially, even in Cornwall, although splits are still used by many Cornish families in their own homes. The warm roll (or scone) should first be spread with strawberry jam, and finally topped with a spoonful of Cornish clotted cream.Scones are rarely buttered in commercially available teas - although we recommend it!

Another variation to a cream tea is called "Thunder and Lightning" which consists of a round of bread, topped with clotted cream and golden syrup, honey or treacle.

England's third largest county, Devon, boasts an impressive range of scenery, between its north and south coastlines, including the two famous national parks of Dartmoor and Exmoor.

Devon has a fine reputation for taking its tourism industry very seriously; the infrastructure is in place and the county has earned its stripes as a provider of top quality accommodation and hospitality. And, at this time of year you'll be spoilt for choice. There are some fantastic late deals around and something to suit everyone's taste and budget. But, that's just the beginning.

For those of you who want to do more than just put your feet up and chill, in idyllic surroundings, here are just a few suggestions (at the risk of omission!) for great days out in Devon:

Beaches: So many magnificent beaches, north and south and all within easy reach: flat swathes of sand at Woolacombe and Croyde Bay (noted for its superb surfing); the sandy dunes of Braunton Burrows and the stunning coastline of Start Bay are, to name but a few, beaches and bays that will satisfy more than just the bucket and spade brigade.

Exmoor: Relatively unpopulated, even in high season, Exmoor's wooded valley, heather moor and spectacular cliff top views from the town of Lynton or a trip on the cliff railway that takes you from Lynton to Lynmouth below, are not to be missed.

Buckland Abbey (Yelverton): Enjoy a trip back in time, at Buckland Abbey, a medieval monastery, dating back to the thirteenth century. The hands-on style exhibition of the exploits of Sir Francis Drake is likely to appeal to all ages.

Dartington Crystal (Great Torrington): A visit to the Dartington Crystal glass factory is a must for those who want to find out more about the ancient craft of glassmaking. The visitors' centre has a glass activity area that is great fun for young and old.

A visit to Dartmouth Castle is worth it for the sweeping views, alone, from its imposing battlements, as well as its wonderful waterside location.

Museum of Barnstaple and North Devon (Barnstaple): The museum encapsulates North Devon's social and natural history, dating back to 1845 and provides a unique insight into the archaeology and pottery industry of North Devon.

Powderham Castle (Exeter): This is definitely a day out for all the family. Powderham Castle, the family seat of the Earl of Devon, is open to the public with guided tours of the impressive staterooms and Castle grounds. The kids will love the children's secret garden and miniature steam railway.

Tarka trail: For an invigorating day out, in the great outdoors, head for the Tarka Trail, which consists of more than 180 miles of winding paths through rural Devon countryside. The trail is suitable for both walkers and cyclists.

South Molton: For visitors in search of the elegance and grandeur of former times, South Molton is sure to please. Famous for its period Georgian architecture, South Molton oozes charm, with its fine churches and museum, its antique shops and stalls selling local produce.

Exeter: The cathedral city of (and university town) has so much to offer: historic sites dating back to Roman times, as well a modern day cosmopolitan atmosphere, shops, pubs and restaurants and a wide range of attractive accommodation. Visit the Royal Albert Memorial Museum & Art Gallery, Exeter, with its display galleries that take visitors on a trip through history to modern day Exeter and further afield.

With its winning formula of beautiful countryside, glorious beaches, picturesque seaside resorts, historic towns and so much to do that appeals to all the family, Devon has, indeed, got the lot.

So, what are you waiting for? Get online and book yourself a break, in Devon, before the high-season tourists beat you to it!