Edinburgh the Jewel in Scotlands Crown

If you're thinking about booking a bed and breakfast in Edinburgh, then you might like to read our interesting article on Edinburgh first

'It seems like a city built on precipices, a perilous city. Great roads rush down hill-like rivers in spate. Great buildings rush up like rockets .' 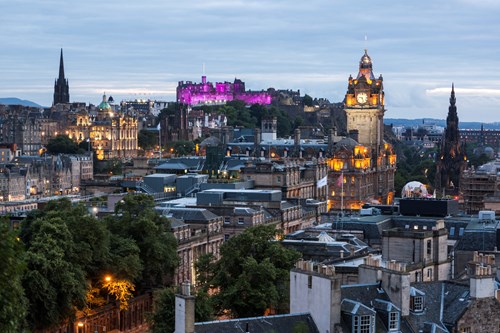 That was in 1905, and over 100 years ago that G.K. Chesterton enthused about the striking setting of Scotland's capital city. And credit where credit's due. When it comes to location, location, location, these words still hold good, today. There's no doubt about it, Edinburgh enjoys one of the most commanding city locations in Britain, but luckily there are many hotels and B&Bs offering bed and breakfast in Edinburgh.

Situated on Arthur's Seat, a craggy outcrop and the site of extinct volcanoes and later glacial activity, Edinburgh is visually spectacular, to say the least. And the best way to take in the delights of this friendly Scottish capital is on foot. Stand back and admire its classic architecture, Georgian crescents, medieval closes, the breathtaking panoramas, magnificent bridges. Above all, take time to visit the city's very epicentre, Edinburgh Castle, around which fortress, the city was built.

But there's so much more to see and do, in Edinburgh, than meets the eye. Culture vultures, for a start, won't know which way to turn. London aside, Edinburgh boasts more buildings of historic or architectural significance, than any other city in Britain. In addition, the city houses around a quarter of all Scotland's A-listed buildings.

Edinburgh, however, is also a modern and forward-looking city that takes tourism very seriously. Excellent accommodation, world-class restaurants, popular pubs and cafes, unrivalled recreational facilities, tourist attractions that appeal to all ages and tastes, the list of options is endless but makes staying in an Edinburgh Bed and Breakfast an ideal weekend away.

Edinburgh is a city of two parts, two characters and almost two separate identities: the Old Town with the castle in pride of place and the eighteenth-century New Town, with its swathes of Georgian architecture. Both the Old and New Town were designated a world heritage site by UNESCO, in 1995; both have so much to offer tourists from all over the world. So, at the risk of serious omission, here are a few ideas of places to visit in Edinburgh -

Edinburgh Castle, Castlehill, Edinburgh, EH1: Scotland's most visited castle is a proud blend of architecture, dating back to the twelfth century. Within the castle are many attractions including St Margaret's Chapel (considered the oldest building in Edinburgh).

Nelson Monument, Calton Hill, Edinburgh. EH7 5AA: Designed by the architect Robert Burn and constructed between the years 1807 and 1815, in memory of Admiral Lord Nelson who died in 1805, views from the top of the Nelson Monument are truly spectacular.

Forth Rail Bridge, North Queensferry, Fife, Scotland, KY11 1HP: Opened to the public by Edward, Prince of Wales, in 1890, the Forth Rail Bridge was the first large steel cantilever bridge to be constructed in the world. The bridge spans an impressive 1.5 miles.

The Palace of Holyrood House

Edinburgh Zoo, Corstorphine Road, West Edinburgh, EH12 6TS: Edinburgh Zoo is world famous not only for its vast range of inhabitants, but also for its participation in educational and community programmes.

B&B Near the National Galleries of Scotland

The Stand Comedy Club, 5 York Place, Edinburgh, EH1 3EB: Established in 1995, in the basement of a pub, as an alternative form of entertainment, during the Edinburgh Festival, the Stand Comedy Club is now recognized in its own right as a showcase for new talent, as well as a venue for established comedy acts.

Did you know that .

. opinion is divided about the origins of the name Edinburgh? One of the most plausible theories is that the word derives from the Brythonic "Din Eidyn" or Fort of Eidyn. A less likely theory is that the name comes from the Anglo-Saxon, Edwin's Fort, named after the seventh century King Edwin.

Top tip for visitors to Edinburgh:

The city's newly launched Edinburgh Pass (looks a bit like a credit card) is the perfect, hassle-free visitors' solution offering free entry to 27 of the city's most popular attractions, as well as unlimited public transport in and around the city.