The Peak District attracts millions of visitors each year. Designated Britain’s first National Park in 1951, this 555 square mile expanse of natural beauty (and tranquillity outside ‘peak’ season) contrasts starkly with the nearby industrial valley towns and larger conurbations of Nottingham, Sheffield, Manchester, West Yorkshire and the Potteries. In short, the Peak District is the complete antithesis of the surrounding swathes of urbanisation. 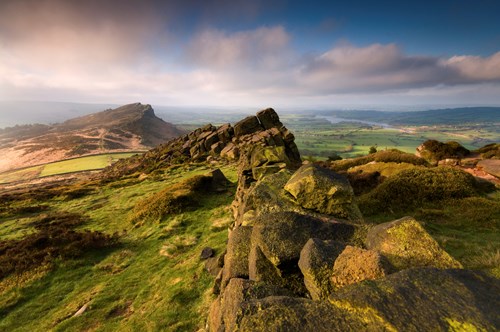 But the real beauty of it is that the Peak District enjoys excellent links with all nearby major cities, making it the most accessible of all Britain's National Parks and the perfect place for a last-minute break. In addition, the Peak District is served by an extensive network of bus and train routes, throughout the area.

Although the Peak District cannot lay claim to any high, mountainous peaks as its name might suggest, the whole region nevertheless boasts some of the most beautiful countryside in Britain. The Peak District is also a prime location for outdoor pursuits especially walking, cycling, climbing and horse-riding. The whole area has a clearly marked network of 'rights of way' and ancient bridleways and it is estimated that more people explore the region on foot, horseback or bike than all other areas of outstanding natural beauty in Britain combined.

The Peak District has two distinctly contrasting landscapes: the northern Dark Peak and the southern White Peak. To the north, west and east are the brooding and often bleak hard peat, grit-stone and heather-clad moors with their deep 'groughs' or gullies and the rocky edges and hillsides of the Dark Peak area. The area known as Dark Peak covers the high moorland north of Edale and is bordered to the west by the former textile centres of Glossop and Chapel-en-le-Frith, to the south down to the moorlands around Buxton and to the east by Howden and Derwent moors. The southern White Peak is classic limestone country with dry stone-walled pastures, intersected by deep dales most notably Dovedale, Lathkill Dale and Monsal Dale. White Peak extends from the Matlocks and Ashbourne in the south, to Hope Valley and Castleton in the north, the Manifold Valley in the west and the River Derwent in the east.

Highlights of the Peak District include:

Arbor Low: Known as the 'Stonehenge of the North', this stone circle, made up of forty-six recumbent stones enclosed by a ditch, dates back to around 2,000 B.C.

Ashbourne: 'The market town of Ashbourne is known locally as the 'gateway to Dovedale'. Ashbourne has one of the most impressive parish churches (mainly thirteenth century) in the Peak District as well as one of its oldest schools, founded in 1585.

Bakewell: With a population of approximately 4,000, Bakewell is the largest village within the National Park area. Home of the famous Bakewell Tart, this charming village has a fourteenth century town bridge and an attractive seventeenth century market hall.

Blue John Cavern (Castleton): The Cavern's vast stalactite and stalagmite interior also contains the Blue John Mine where Blue John stone, a rare and exquisite type of fluorspar, is extracted.

Chatsworth House: Magnificent Chatsworth House and the Duke of Devonshire's 'Palace of the Peak' is undoubtedly one of Britain's grandest stately homes. Set among beautiful gardens, the magnificent seventeenth century Palladian house contains works of art from around the world.

Cromford: Site of Arkwright's Mill, the world's first water-powered cotton mill built in 1771, Cromford, today, is at the heart of the Derwent Valley World Heritage Site.

Dovedale: With its thickly-wooded slopes, dramatic wind-sculpted rocks and stepping stones, Dovedale is one of the prettiest and most popular river valleys in the Peak District.

Eyam: Step back in history and visit the village where the inhabitants imposed quarantine upon themselves to contain the plague of 1665 to 1666.

Peveril Castle: The ruins of romantic eleventh century Peveril Castle are located in the centre of the Peak's cave district, overlooking Castleton.

So, if you're feeling frazzled and champing at the bit for a change of scene, why not base yourself in one of the lively nearby cities and then escape to the peace and tranquillity of the Peak District - for the best of both worlds!