Explore the Scottish Borders - past and present!

Explore the Scottish Borders - past and present!

The beautiful Scottish Borders have a tale (or two) to tell.

Who could imagine that in mediaeval times this 1,800 square mile expanse, from the Southern Uplands of Scotland to the Berwickshire coast, was once the site of many a bloody clash between the marauding English and the determinedly defensive Scots? 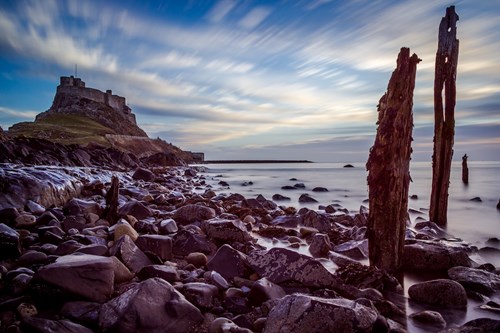 Image of Lindisfarne Castle on Holy Island, Berwick upon Tweed

Today, the tranquil, undulating landscapes of the Scottish Borders belie the region's turbulent and brutal past. Yet, history tells a different tale - one of grim Anglo-Scottish conflict. These were times when the English tried to encroach upon the Borders of Scotland and when the feisty Scots, predictably, rose to the challenge and refused to take things lying down.

And let's make no bones about it (no pun intended), some of the modern inhabitants of the Scottish Borders aren't too keen to forgive and forget either! But nowadays, it's all about fun and friendly jest, celebration and national spirit, as well as welcoming visitors in search of more peaceful pursuits! Passions, for instance, run high at English/Scottish rugby matches, when the blue and white crossed flag of Scotland reigns supreme over the Union Jack. The popular annual pageant called Common Ridings is another example of national pride, when local inhabitants gather to 'patrol' their territory against 'cattle thieves' (or 'reivers') from across the border, as they did in days of old. This enactment, of course, is always perfectly amicable and a great spectator attraction for all concerned.

But why not find out for yourself what the area has to offer. Next time you fancy a break, head for the Scottish Borders and enjoy some of the local colour; base yourself in one of the many peaceful B&Bs dotted throughout the region. Start by delving deeper into the Borders' colourful past and explore some of its famous historic landmarks. Evidence is everywhere, with fortified houses, castles and mediaeval abbey ruins all hinting at more tempestuous times. For a real flavour of the past, visit the ruins of the four great mediaeval abbeys: Melrose Abbey, Kelso Abbey, Jedburgh Abbey and Dryburgh Abbey, all located within a small radius of one another. Each bears the scars of former warfare. Much of the church of Dryburgh Abbey, for example, was destroyed during borderland skirmishes, although its cloisters and living quarters are amazingly well-preserved. Then, there's the foreboding fortress, Hermitage Castle (on the B6399, south of Hawick), where Mary Queen of Scots is supposed to have galloped on horseback to see her wounded lover, the Earl of Boswell.

In complete contrast, one of the best ways to appreciate the beauty of the Scottish Borders is to take the circular literary tour that starts from the seventeenth century spa town of Moffat (by the A701) and then follows along the Tweed Valley.  This tour takes in some of the most stunning landscapes of the Scottish Borders, while examining the region's connections with literary greats such as John Buchan (1875 to 1940), Sir Walter Scott (1771 to 1832), William Wordsworth (1770 to 1850) and James Hogg (1770 to 1835). Here we have the hills and rivers immortalised in literature by these famous poets and novelists. Immerse yourself in the scenic feast that fired the imagination of some of Britain's greatest writers.

Perhaps, however, you simply want to let sleeping dogs lie and prefer to put history to bed. If all you want to do is enjoy what the 21st century Scottish Borders have to offer, then you will not be disappointed. Activities with a contemporary slant include golfing, hiking, cycling and fishing. The Borders are also well-known for their quality woollen and textile products. Check out the mills that have factory outlet shops, in towns such as Peebles, Hawick and Selkirk; pick up a bargain.

All in all, the Scottish Borders make a great place to visit for those who wish to escape to the countryside for a guaranteed relaxing break. So, just chill out and take in the wonderful scenery of this increasingly popular tourist destination.