The Snowdonia National Park boasts some of the most beautiful and spectacular scenery in the country. Where else can you walk on wind swept moorland; sail on a mountain lake; explore a copper mine; cycle on designated cycle routes and enjoy such a range of natural beauty and wildlife? 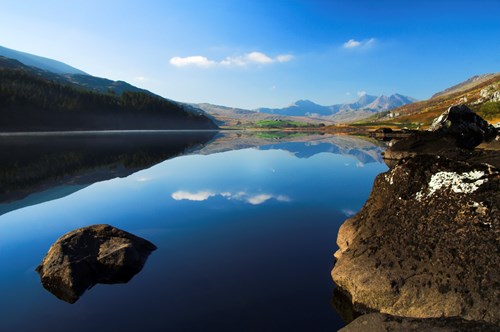 The Snowdonia National Park Authority works with landowners and other organisations to look after Snowdonia's landscape and wildlife, and to make sure that people are given the chance to enjoy and appreciate what they find there, without spoiling it for future generations.

The 840 square miles (1351sqkm) of National Park stretches southward from Conwy as far as Machynlleth. It includes miles of beautiful coastline as well as rugged peaks and dramatic wooded valleys, but pride of place is held by the mountain itself. Snowdon stands at 1,085 metres above sea level - the highest peak in Wales and England - and the Snowdon Mountain Railway, the little train with views above its station, runs at regular intervals from Llanberis to the summit. On fine days the views are unsurpassed. Don't miss this spectacular and dramatic experience.

Llanberis, with its twin lakes at the foot of Snowdon, attracts serious climbers, weekend walkers and travellers who drive along the Llanberis Pass, clawing its way past sheer slabs of rock and scree slopes to Pen y Pass. This is a popular starting point for two of the routes to Snowdon's summit - the PYG and the Miners Paths. Use the Sherpa bus, in particular the park and ride service from Llanberis. It's a very relaxing way to get to the heart of the National Park

Since its launch in the summer of 1998, the Snowdonia National Park Authority has supported the National Trust's Appeal to the public for £4m to purchase and maintain more than 4,000 acres of farmland on the slopes of Snowdon. As President of the National Trust's Snowdonia Appeal, the world famous actor, Sir Anthony Hopkins, has given a great deal of impetus to the fund-raising effort. He said "Supporting the National Trust's purchase of this part of lovely Snowdonia gave me the opportunity to do something positive for Wales, my birthplace."

Caring for the countryside is a costly business, and Snowdonia needs as much help as possible to survive to delight our children and grandchildren.
When touring Snowdonia, the picturesque mountain village of Beddgelert is definitely worth a visit, with its outstanding location of massive rock buttresses, steep mountain slopes and wooded hillsides. If you follow the footpath besides the rushing River Glaslyn to a stone monument, you will find the resting place of Gelert - the dog left by Prince Llywelyn to guard his child. The Prince had found the dog covered in blood and his son nowhere to be found. Gelert was killed by his master before he realised that the heroic hound had in fact saved his child from a wolf.

In more recent times, Beddgelert has been successful in many competitions, the Britain In Bloom competition and the Entente Florale, the prestigious Europe in Bloom competition. Rupert Bear is linked with the village as Alfred Bestall the writer and illustrator lived here for a time.

A favourite all-year round haunt is Betws-y-Coed. Artists, photographers, naturalists, ramblers and anglers can be seen at Pont-y-Pair (Bridge of the Cauldron), where raging waters crash down into a pool. Betws-y-Coed boasts a variety of shops - from Welsh crafts to the latest climbing equipment. A special attraction within easy reach of Betws-y-Coed is Swallow Falls, a tumultuous waterfall pouring into a deep ravine.
The largest natural lake in Wales, Llyn Tegid (Bala Lake) is flanked by high mountains and the town of Y Bala, based at the eastern end of the 4-mile (6.5km)long lake is traditionally Welsh in tone and temperament.

Scenic variety has always been Snowdonia's strong point and Snowdon itself is only seven miles (11km) from the sea. The lower lands around the mountains consist of wooded valleys, open moors, lakes, river, forests and waterfalls. Impressive Aber Falls at Abergwyngregyn, near Bangor is the largest natural waterfall in Wales.

The Snowdonia National Park Authority runs a series of guided walks throughout the year. For further details call in at a Tourist Information Centre. Plas y Brenin, the National Mountaineering Centre at Capel Curig has a dry ski slope, canoeing, sailing, climbing and other activities and facilities on offer. Dolgellau is one of the best located touring centres in Wales, being within easy driving distance of the northern peaks and the Cambrian Coast. Nearby is Cader Idris a looming mountain 892m (2927ft) which guards the southern gateway to the Snowdonia National Park.

With so many hotels and Bed and Breakfasts available in and around the Snowdonia National Park, why not treat yourself to a break to explore this wonderful area.

Find your Snowdonia Hotel, or if you want a more personal service choose a Snowdonia B&B -