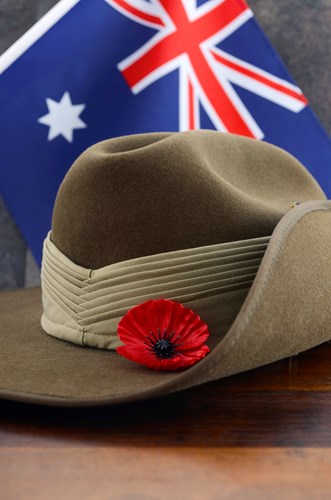 What does it mean today ?

Australians recognise 25 April as an occasion of national commemoration. Commemorative services are held at dawn, tet and join in marches through the major cities anhe time of the original landing, across the nation. Later in the day ex-servicemen and women med many smaller centres. Commemorative ceremonies are held at war memorials around the country. It is a day when Australians reflect on the many different meanings of war

ANZAC is the acronym for Australian and New Zealand Army Corps, the formation created in December 1914 by grouping the Australian Imperial Force and New Zealand Expeditionary Force stationed in Egypt under the command of Lieutenant-General William Birdwood. Initially the term 'Australasian Corps' had been mooted for this force, but there was a reluctance among both Australians and New Zealanders to lose their separate identities completely.

Those heroes that shed their blood

And lost their lives

You are now lying in the soil of a friendly country

There is no difference between the Johnnies

And the Mehmets to us where they lie side by side

Here in this country of ours

Who sent their sons from far away countries

Wipe away your tears

Your sons are now lying in our bosom

And are in peace

After having lost their lives on this land, they have

Become our sons as well