This beautiful South Western coastal area has all-year-round holiday appeal; but it is, after all, the Riviera: vibrant, stylish, upbeat. Surf-lovers seeking their thrills, beach babes strutting their stuff, elderly couples strolling along the promenades and families enjoying a fun packed day out. This is people watching, at its best. And, on a sunny, summer’s day, you could be forgiven for thinking that this is the French Riviera, the similarities are so striking. But, no, this is the glorious English Riviera, otherwise known as Torbay. 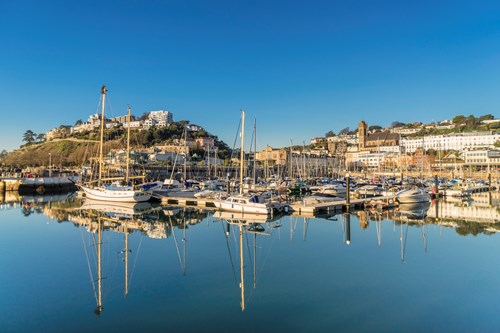 But there the comparison ends. The British version has a fine pedigree all of its own. Over the ages, the English Riviera has earned itself the reputation as a top tourist region thanks to its winning formula for pleasing those in search of a great British break.

For a flavour of what this wonderful twenty-two mile coastal strip that has to offer, dip into the following list of goodies; there's something for everyone:

Watersports: Torbay and the surrounding area is famous for its access to an impressive range of water sports: swimming, diving, surfing, boating, angling; whatever floats your boat, the English Riviera's got the lot. Mingle with the yachting fraternity at Torquay or Brixham Marina or take a boat trip from any of the departure points, along the Bay. Torbay is a fisherman's paradise, with unrestricted sea angling off several beaches. Catches include bass, bull huss, dogfish, conger, garfish, flatties, mullet and mackerel.

Café Culture: Sit back and enjoy the scene from a nearby quayside café or restaurant. The English Riviera is famous for its lively café culture; the buzz is tangible, particularly during high season. Restaurants are noted for their quality local fare as well as pandering to the international palate. If you're looking for something a bit more basic, or perhaps a traditional English afternoon tea, Torbay offers something for all tastes.

B&B Accommodation: The whole area is well catered for with a wide selection of B&B accommodation to suit all budgets. Torquay, Paignton, Brixham, or anywhere else throughout the area, for that matter, would make an ideal base for exploring the English Riveria.

There is an air of optimism about this British coastal region, so aptly dubbed the English Riviera, where holidaymakers gravitate all year round. Torbay has moved with the times, while still managing to retain a general air of up-market refinement - a rare combination, which is so often missing from many holiday resorts abroad.

Torbay is clearly a wise choice for the discerning tourist.