Tranquility along the Thames

Promoted as a ‘trail for everyone’ following the ‘greatest river in Britain’, the 184 mile (294 km) Thames Path is one of the most frequented riverside paths in Britain. The trail follows the Thames from its source in the Cotswolds and  meanders through beautiful rural scenery, meadows, unspoilt villages, historic towns, urban areas and the heart of the city of London. The trail culminates a few miles from the sea at the Thames Barrier, Greenwich. 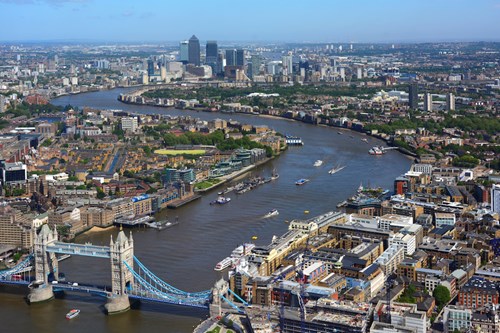 Although only officially opened as a National Trail as recently as 1996, the Thames Path has been a source of inspiration for writers, poets and artists since time immemorial. Spencer, Shelley, William Morris, to name but a few, have each waxed lyrical about the beauties of the Thames Path. Even Kenneth Grahame was actually referring to the wildlife he had observed from the path when he gushed excitedly in the Wind in the Willows: ''It was so very beautiful that the mole could only hold up both fore-paws and gasp, 'O my! O my! O my!''. Today the Thames path is popular with sightseers and local people alike. For local people, the Trail offers a haven of tranquillity, or at least a more pleasant route to work; for tourists it is one of the most relaxing ways to explore the surrounding locality. The Thames Path is also a vantage point from which to survey the sights of London.

For visitors based in Central London, the four heritage trails, each of approximately 3 miles (5 km) may be of particular interest to those who want to combine a spot of exercise with their sightseeing. The first, the Golden Jubilee Bridges starts from Soho Square and goes via Leicester Square, crosses to the South Bank and on to Covent Garden, taking in the Embankment Gardens. Millennium Bridge, the second trail extends from St Paul's Cathedral to the Tate Modern. The third, Riverside London, crosses back and forth between North and South banks and follows the Thames from Vauxhall to the Design Museum, Bermondsay. The fourth Central London heritage trail, called South Bank, links Westminster Bridge with the Imperial War Museum, Lambeth.

But, wherever you decide to join the Thames Path, getting there couldn't be easier. The Thames Path is clearly signposted throughout its length and is well serviced by bus train or boat. The entire route is fairly flat and therefore suitable for walkers of all ages and abilities. The Trail itself is accessible, all year round, although visitors should note that certain stretches, particularly west of Oxford, may become flooded, following heavy rainfall.

The Thames Path makes a perfect day out or just somewhere to chill out and go for a gentle stroll.  More ambitious ramblers may choose to cover longer stretches of the Thames Path, or even accomplish the whole course from source to sea, spread over several weekends or longer. There are numerous places to stay alongside the Thames Path ranging from quiet, rural locations to more lively centres including Oxford, Abingdon, Wallingford, R, Henley-on-Thames, Windsor and, of course, London city centre. The route also boasts numerous pubs and restaurants and some of the finest luxury B&Bs in the country, not to mention all the typical facilities that make strolling aimlessly along the riverside such a pleasure.

Find the perfect hotel London, or maybe even a B&B London for something a little different. Click here!