Search
You Are Here:
Thursday, 1 September 2016

Chester - such a civilised city

Chester – such a civilised city

Over six million people visit Chester, every year, making this charming city one of the most popular short stay tourist destinations in Britain. 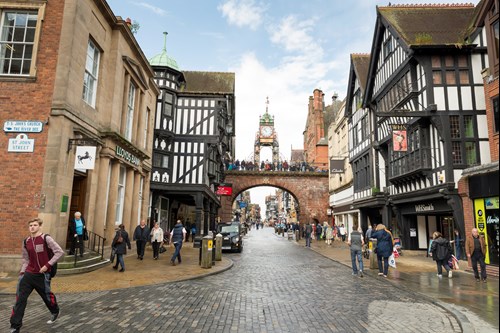 So what's so appealing about Chester from a visitor's point of view? The simple answer is that this famous walled city has something for everyone: history, rich heritage, sophisticated ambience, chic shops, cafés, pubs and restaurants, street theatre, lively lifestyle, an abundance of prime location B&Bs and above all, a genuine welcome. Add to this the fact that Chester is a compact city and it's easy to find your way around and really, you can't go wrong!

Chester was built over 2,000 years by the Romans as a garrison port named 'Deva'. The Romans held sway for more than 300 years until the Saxons and then the Normans extended the town, adding an abbey (which later became a cathedral, in Tudor times), a castle and larger walls. In mediaeval times, Chester was an important port and trading centre, with its characteristic half-timbered merchants' houses, built on stone cellars and linked by galleried walkways. Chester's fortunes, however, took a down-turn during the seventeenth century when the River Dee silted up and Cromwell's men wrought havoc upon the city, destroying many of its original buildings. The next 200 years or so were spent restoring this cathedral city to its former glory. During the Georgian period, Chester re-emerged as a place where prosperous merchants chose to settle. But it is the nostalgic Victorians whom we have to thank for the 'replica' black and white 'Magpie style' façades that were built in mediaeval and Tudor style.

Things to see and do in Chester:

Walk the Wall: If you do nothing else, at least make time to walk along Chester's famous city walls; other British cities have fine city walls but none as complete as these or as accessible (some sections have wheelchair access). It takes about an hour to walk round the entire walls. From this vantage point, take in the sights: the cathedral, Roodee (the ancient racecourse), the Welsh hills in the distance, a bird's eye view of the River Dee, the hustle and bustle of the Rows below .. Pause en route and make a wish at the 'Wishing Steps' which link the south and east walls. Legend has it that if you manage to run up and down these steps, without drawing breath, then your wish is sure to come true.

The Rows (Eastgate Street, Bridge Street, Watergate Street): Although a few of the two-tier shop fronts, notably the '3 Old Arches', Bridge Street, date back to the thirteenth century, most of the unique store façades with which Chester is synonymous were actually built during the Victorian period. Enjoy the frontages for their architectural quirkiness. But be prepared to battle past the high street names in search of Chester's many specialist shops, from gourmet food to up-market arts and crafts.

Chester Cathedral: Built in 'stages' and occupying pride of place at the heart of the city, Chester Cathedral has its origins in the eleventh century. The last major construction work was carried out in the sixteenth century. The splendid edifice that we see today was once St. Werburgh's Abbey, which became a cathedral in the 1540s. Chester Cathedral remains one of Britain's best-preserved examples of a Benedictine abbey. The cathedral has some amazing features including the choir with its intricately carved stalls and magnificent stained glass windows.

Chester Zoo (Caughall Road, Upton): This is no ordinary zoo. Founded in 1903, Chester Zoo was truly visionary for its times in its aim to give its inhabitants plenty of space. To this day, animal welfare remains of paramount importance. Its 7,000 or so inmates are housed in generously proportioned enclosures and 'natural' habitats: a free-flying bat cave, human-sized prairie dog tunnels, a 'monkey kitchen' and much more. Conservation is also high-profile at Chester Zoo with several species bred specifically for returning to the wild.

Chester Racecourse: A day at the races is a great way to take a break from all that sightseeing. Notoriously difficult to navigate, Chester's racecourse is constructed in a 'tight' circle which adds to the atmosphere of thrills and spills. If you happen to be visiting Chester in June, then the spectacular Roman Race Day is a must.

Choose Chester for a well-earned break that will appeal to all the family. Keeping everyone happy is a bit of a tall order, but if any city can rise to the challenge - Chester can!