Norwich 'Englands city in the country'

‘Englands City in the Country’ 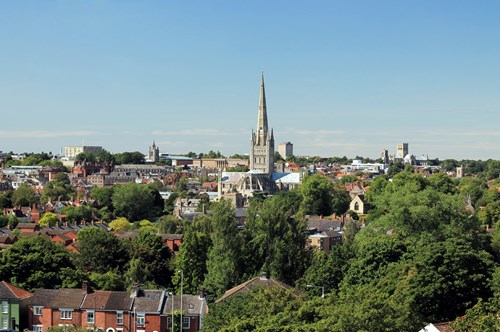 Can you guess which British city was described by J.B. Priestley in 1933 (‘English Journey’) as ‘a grand, higgledy-piggledy, sensible old place’ and ‘…the most Dickensian atmosphere of any city I know’? To give you another clue, a more recent study by the European Commission to determine the ‘most habitable city’ in Europe, from a political, cultural and social perspective, concluded that this particular city beats even York and Bath as one of Britain’s top British cities. The city in question is Norwich.

So why is Norwich so popular? The bottom line, according to researchers is that this cathedral city manages to blend old world charm, history and heritage with all the trappings of a vibrant, affluent and modern metropolis. And despite being a city, Norwich has a relaxed, provincial atmosphere which gives it the thumbs up as both a great place to live and a very satisfying place to visit.

Click here to book your Norwich B&B, or Norwich Hotel

The city of Norwich has a fascinating history that dates back to the late fourth century. At the time, there were several settlements around the confluence of the rivers Wensum and Yare. One of these settlements became more powerful than its neighbours and was even given its own mint and named 'Northwic'. The early town was first fortified by the Saxons in the ninth century. (The city still retains the 'higgledy-piggledy' Saxon-style street layout mentioned by Priestley). By the early twelfth century, Norwich had the third highest population in England, after London and York and was an important market town with a flourishing textile industry. Its fortunes, however, began to dwindle as a result of the sweeping changes brought about by the Industrial Revolution. Today, Norwich is a thriving modern cathedral city; it is also one of Britain's most complete and well preserved mediaeval cities.

The following are a few suggestions of things to see and do in Norwich:

Antiques, arts and crafts: Head for Elm Hill with its cobbled streets, lined with half-timbered houses. Elm Hill is renowned for its antique and craft shops and other specialist outlets.

Norwich Cathedral: Founded in 1096, Norwich cathedral rises to a height of 315 feet. The spire is fifteenth century. The interior stone-vaulted roof is carved with over a thousand coloured and gilded stone bosses depicting the story of the Bible and around four hundred bosses, illustrating scenes from mediaeval life, adorn the cathedral's Norman cloisters.

Norwich Castle (Shirehall, Market Avenue): This impressive Norman keep was once a royal castle. It currently houses displays of local archaeology, silverware, ceramics and art. The first castle was constructed of wood that was replaced in the late 1100s by a massive stone fortress. Between the thirteenth and late fifteenth century, the castle doubled up as county jail.

The exciting hands-on scientific displays and activities make the Inspire Discovery centre a must for inquisitive minds of all ages.

The displays housed within the main exhibition building bring Norfolk's aviation heritage alive, from the days of early aviation to present day civilian and military operations. In pride of place is the huge Avro Vulcan bomber used during the Falkland War of 1982.

The Sainsbury Centre for Visual Arts (located three miles west of Norwich at the University of East Anglia): This important collection is housed in a building constructed of aluminium and glass, designed by the architect Norman Foster. The centre contains an amazing collection of art acquired by Sir Robert Sainsbury.

There's so much to see and do in and around Norwich that you'd be hard pressed to fit it all into a short weekend break. But if you take in just a few of the highlights, you will get the gist of what Norwich has to offer.

Where Norwich wins hands down compared with many other European city break destinations is that this popular English city will not leave you feeling foot-weary and exhausted. You are more likely to feel relaxed (and rather pleased with yourself for choosing Norwich for that much earned break!). In short, the city of Norwich is the ideal destination for those who prefer to pace themselves and simply enjoy the atmosphere of one of England's more laid-back cities.